Merry Christmas from How to be Swell. This Christmas think back to those wonderful Norman Rockwell pictures for the Saturday Evening Post, and the warm feelings  that they evoke. I hope that your Christmas is the embodiment of those idyllic pictures, I wish for all of you great fellowship, good food, celebrations and long embraces from your loved ones. Stay swell 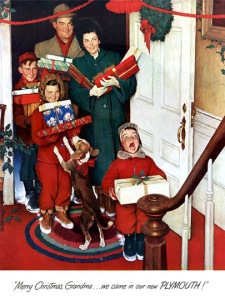 Frederick Douglass was an American social reformer, orator, writer and statesman. He had a lot to say about the world around him, as well as the people occupying it. Drastic changes were happening in society and culture in his day which helped to thrust him into the role of a great leader. After escaping from slavery, he became a driving force of the abolitionist movement, gaining note for his dazzling oratory and anti-slavery writing. I am going to share with you some of Frederick Douglass’ wit and wisdom on being a man and ultimately being swell. END_OF_DOCUMENT_TOKEN_TO_BE_REPLACED

Here is a quick plug for a new blog that I’ve found. These guys have a fantastic site to visit, it is an open forum type of blog, with a number of great groups (nearly 600). They discuss everything from scotch to bow ties, and from books to guns. I think it is a perfect accompaniment to this particular blog you are reading. Check it out: The Art of Manliness is truly swell. You can also sign up for a daily dose of manliness in your e-mail. If you sign up they send you some free stuff to read as well.