Last year I wrote all about a record breaking dive With James Cameron and National Geographic and a record breaking watch from Rolex, if you get a minute you can read it here. This year there are some excititng announcements on that historic dive.  At 10,908 meters (nearly 36,000 feet) The Mariana Trench is the deepest point in the ocean on earth. On March 26th, 2012  filmmaker and explorer James Cameron in partnership with National Geographic made the first solo dive to and scientific exploration of the Mariana Trench. Making this kind of a dive was no small feat, and to commemorate Cameron’s expedition as well as the  documentary of said expedition called Deepsea Challenge 3D, Rolex has released a new edition of a great watch. Personally I was hoping for the actual Deep Sea Challange model to be publicly released,. However, what they did introduce is still rather exceptional. They have delivered a new version of the Deepsea Sea-Dweller with a gradient “D-Blue” dial that fades from deep blue to black. The coloring is intended to invoke images the ocean’s depths, diving lower and lower until you reach a point completely void of light. 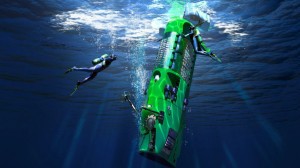 In 1960 by Captain Don Walsh and Jacques Picard used a submersible called the Bathyscaphe Trieste to reach the depths of the Mariana Trench. That year Rolex was along for the ride as well, attached to the  Trieste was the Rolex Deepsea Special. That watch can still be seen today, and it survived the dive without missing a beat, keeping perfect time when they resurfaced.

For the latest expedition with National Geographic, Rolex reinvigorated their historic affiliation with extreme exploration and designed a modern deep-sea special, the 51mm megadiver, known as the Deepsea Challenge. Attached to a mechanical arm Deepsea Challenger submersible, the Rolex used for the expedition was built to withstand depths of 12,000 meters.

The Deepsea is among the most robust in the line, and like the standard model this new edition still boasts extreme waterproofness to 12,800 feet. It also retains the 44 mm stainless steel case and titanium case back. it Features bright blue Chromalight luminescence is used on a large dial for legibility in darkness and  in the deep, where optical distortions can adversly affect visibility. The Deepsea also has Rolex’s  “Triplock” winding crown and patented helium escape valvemaking it a true diver’s tool. It is powered by Rolex’ in-house COSC-certified  Calibre 3135 self-winding movement with 48-hour power reserve. The new Deepsea Sea-Dweller model specifically commemorates Cameron’s expedition. In addition to the new dial color change. The color used to apply the “DEEPSEA” printing on the dial is the very same Chartreuse as the submersible vehicle Cameron used for the expedition.

The Deepsea Sea-Dweller is priced $300 higher than the existing model at $12,350. This watch while isnt technically limited edition it is reported to be lower in production. I am looking to try one on myself, and to go see the Deepsea Challange 3D, at any depth both are very swell.