I have fond memories of growing up with my cousins spending time at our grandparents’ house. My grandmother used to teach us how to play poker and we used buttons instead of chips, they also had a great vintage bar in their basement and a gorgeous classic car in their garage (which is now in my garage). This backdrop helped us kids to become thespians; we imagined scenes starring ourselves as mobsters of the coolest make. Of course to “top it off” we all had to have the coolest hat. In my grandparents’ kitchen closet was my grandfather’s hat. He actually had a couple that we wore, but one was always the coolest, and whoever got that one was the “Don”. His hat was the coolest trilby I had ever seen, well at least from a kid’s perspective. I have fond memories of this iconic hat, many fewer men wear hats today, but this one will always be a classic.

A fedora is a men’s felt hat that is typically creased lengthwise down the crown and pinched in the front on both sides. A few fedoras are stylized in various ways and have names of their own, including the trilby. Fedoras can also be creased with teardrop crowns, diamond crowns, center dents, and others, and the positioning varies, though creasing does not make the hat. The typical crown height is about 4 1/2 inches. The brim averages about 2 1/2 inches and can be left as cut, finished with the edge sewn over or under-welt, or bound with a ribbon trimmed edge.

A trilby hat is a type of fedora. In England it was viewed as the rich man’s hat. It is sometimes called the brown trilby or crumpled fedora and is often seen at the horse races and classy outdoor gatherings. The London hat company Lock and Co. describes the trilby as having a “narrower brim which is angled down at the front and slightly turned up at the back”. The trilby also has a slightly shorter crown than a typical fedora design. Fedoras or Trilbys can be found in nearly any color, but black, grey, tan, and dark brown are the most popular. Traditionally it has been made from rabbit hair felt, but now days is found in other materials, such as tweed, straw, wool and wool/nylon blends. The more modern straw Trilby was made to be more casual and to keep you cooler being breathable, and has become quite popular in its own right.

As I alluded to earlier, the fedora is most commonly associated with Prohibition era

gangsters, and detectives. Film stars in the 1950s popularized the fedora in their movies, and off screen. Of course we can’t forget about Indiana Jones making famous the fedora in the franchise of the same name. The hat reached its peak of popularity in the 1960s, but quickly faded again in the 1970s when most of men’s hats became obsolete, and fashion began focusing on the styalized coiffs underneith the hats, as opposed to the hats themselves. James Bond in his early film appearances wears a trilby, most notably in the opening “gun barrel” sequences with Sean Connery as bond. With the shift to Roger Moore, Bond no longer donned hat, and in the novels he seems not to wear a hat at all.

If you are into that classic look, there are still many places you can find a nice trilby. I recently came across from the famous Lock and Co. From the label’s ‘Lock & Roll’ division, this trilby hat fuses traditional attention to detail with sharp, contemporary style. It is a black and silver patterned satin hat, with a luxurious grosgrain band and bow, and it is fully lined for comfort. This piece retails for $210 ,made in the United Kingdom from patterned satin, and will add a dash class to all your evening ensembles. It may not be my grandfather’s Trilby, but it is totally swell. 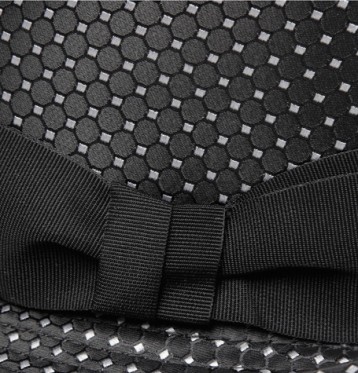 (Images courtesy of Lock and Company)

2 responses to “The Trilby Fedora”