Admittedly I have over looked Tag Heuer for some time, aside from a couple of models, not much has got me going from them. Of course I do love the Monaco (you may see that in a subsequent blog post). Recently I acquired a great watch from them, and it happens to be a watch they made twice. One of the only watches that they produced under both the Heuer name, and post acquisition by Techniques d’Avant Garde then again under the Tag name (I’ll explain in a bit). Heuer began as a watchmaker in St-Imier, Switzerland in 1860 with foundation of Uhrenmanufaktur Heuer AG by Edouard Heuer. The company was purchased by TAG Group (Holdings) S.A. in 1985 and Heuer became TAG Heuer. In 1999 TAG Heuer was sold to French luxury goods conglomerate LVMH -Moët Hennessy, Louis Vuitton.

In 1963 Heuer launched their first watch line with its own brand name; they called it the Carrera after Le Carrera Panamericana Rally Mexico. In 1950 Mexico was completing its section of the Pan-American Highway and to celebrate its completion they held the first of many legendary road races from Guatemala to the United States. To this day it remains one of the most popular line of watches in their offerings. As you can see Heuer had an intimate relationship with this Carrera, and wit the Monaco I mentioned earlier.

The Carrera was a tool watch. A tool watch is a piece that has functions other than merely measuring the passage of time. The Carrera came as a chronograph (with a tachymeter, pulsometer, or decimal bezel). They came in stainless steel on a leather band and in a few dial colors. It became a great seller and broadened its variations in which it was available well into the 1980’s. The Carrera was by no means new in 1964, but it was revolutionary in terms of design and distinctive by comparison to its contemporaries at the time. Heuer wanted excellent readability so the 1/5 second scale was printed on the inner bezel, and the Tachymeter or Pulsometer markings were transplanted from the center of the dial out to the edge thereby making the face larger and cleaner in appearance. It was powered by the Valjoux caliber 72.

When Tag took over the Heuer brand in 1985 they were looking for a way to show the watch world who they were as well as pay homage to the historic name of Heuer. They reissued a couple of watches under the Tag name, but none quite as significant, or 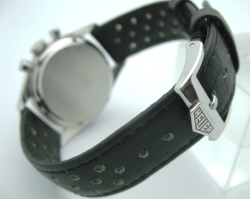 done so well as the 1964 Carrera reissue. In 1996 they crafted this watch to be nearly indistinguishable from the original in every way, and to top it off they were careful to omit the tag name from any of the signatures even the buckle.

It is a gorgeously simple black dial chronograph with slightly indented sub-dials. It is in stainless steel or 18 karat gold, and either comes on a very attractive perforated leather band. It carries a hesalite crystal and the chapter ring is in white to contrast the face. The screw in case back also displays the Heuer logo as well as “1964 Carrera re-edition”, the model number, and the numbered edition of each watch out of 10,000. Concealed beneath is the work-horse also signed as Heuer, the Lemania 1873. Unfortunately the Valjoux movement was no longer available at the time of the re issue. Ironically the Lemania movement was the main competitor of the Valjoux that powered the original. The famous Omega Speedmaster also shares this movement known to them as the cal 1861. 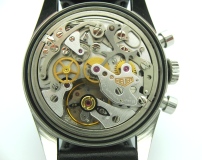 The re edition of the Carrera became another critical and sales success for Tag Heuer. There are limited numbers produced, but can still be found used or even like new for fairly reasonably priced. Yet again anyone could visit the local dealer and find a Carrera to wear on their drive through Mexico on the Pan-American. It isn’t the same as having the original, but a re-edition done this close to the pioneer is incredibly swell.